skip to main | skip to sidebar

Wanker of the Week

Well, there are so many candidates, most of whom work for the BBC.

But sometimes it's important to go for the obvious one.

I feel the stench of corruption approaching just by typing his name...

Some leopards (in this case, snakes) and all that...
Posted by Bishop Brennan at 13:20 2 comments: Links to this post

Ronald Reagan must be turning in his grave. His closest ally in the war against the Communists (he could hardly rely on the cheese-eating surrender monkeys now, could he...) completely fucked by the Establishment... yet again.

We're returning to the Dark Ages of socialism, cheered on by the Muppet Show that is the BBC (apologies Kermit and Co - you're nothing like as stupid and craven to 'New' (i.e. Same Old) Labour as Peston, Robinson and Co).

I wonder what the Gipper might have said about the motives of Brown and the rest...

If it moves (or might move in the future), tax it
If it is still moving, regulate it (badly)
If it stops moving, subsidise it
This should be inscribed on Gordon Brown's tombstone. Preferably, as soon as possible...

That, and, given his insane addiction to Big Government, a picture of a begging bowl - the one he may well end up proffering to the IMF...
Posted by Bishop Brennan at 12:56 No comments: Links to this post

Labels: thick people, total and utter bastards, Wastes of Space, why can't these people just fuck off and die?

The eagle-eyed will have noticed a new feature here on Craggy Island - the 'Recently Drunk' sidebar...

This is your humble Bishop's effort to stick two fingers (or one, if you're one of our American friends) up at the health fascists who have stuck posters all over the Metrocity metro telling us all that we drink too much.

These fuckers need to understand:

- I do a stressful job, working in the Diocesan Council with utter cunts like Archbishop D'Inde, who are busy trying to fuck up the Diocese's investments.
- I have to travel on the Metrocity metro.... and the Metrocity above-ground
- Because my salary's shite - or, rather, I have to pay so much of it in tax - I have to live in Chav-ville, alongside the recipients of my generosity
- Who repay me by spending it on cheap cider, being violent, scaring the shit out of Mrs Brennan and anyone with half a brain, and then visiting Chav-ville A&E, where they are singularly unpleasant to the docs and nurses who try to help them.

And you fuckers have the nerve to tell me not to drink...

You should be grateful I don't shoot-up... the chavs' flats (actually, make that my flats, since I pay for them).

Now fuck off back to Guardian La-La Land, where everyone, darhling, has a BMW and a Tuscan Villa and lives in the nicer bits of Metrocity, and therefore can 'afford' to pay more tax...

Cunts.
Posted by Bishop Brennan at 12:42 No comments: Links to this post

Oh joy! The muppet 'Justice' Minister and Lewisham MP, Bridget Prentice, has announced that Sharia courts can now have a formal role in part of the UK legal system - that relating to divorce.

Was Harriet Harperson consulted? Do Muslim women not count as women who have rights? Or do religious rights outweigh the right to be treated fairly in an open court?

Not that I'm saying that the UK's family court system is fair or anything - just one look at the Fathers for Justice website will at least raise questions... But I thought that Harperson's whole idea was to fuck men (obviously not literally!), not give them an advantage?

As Private Eye might put it, shurely shome mishtake?

Or have Muslim votes become so crucial to Labour that they will even abandon core principles? Perhaps rich fundamentalist Muslims have offered, in return for this wonderful example of multiculturalism in action, to bankroll Labour's election campaigns - including Osama Bin Laden, say? Given their aim of creating a Caliphate which would include the UK, perhaps this is the most logical explanation?

What am I missing? Perhaps Bridget could tell us before she gets booted out at the next election (assuming no sudden influx of postal voting into Lewisham, that is...).
Posted by Bishop Brennan at 06:40 No comments: Links to this post

Just what is the UK's debt burden?

Fraser Nelson - amongst others - has pointed out some of the, ahem, allegedly dodgy accounting tricks employed by Gordon Brown and co to understate the level of UK Government debt relative to GDP.

The new 'series' is called 'National Debt excluding Northern Rock'. Quite what has happened to Bradford & Bingley, and what will happen with the latest acquisitions of shareholdings in the 'commanding heights' of the financial part of the economy, well, we can't be sure - 'Ratio of UK debt to GDP, excluding Government liabilities relating to banks, PFI, public sector pensions, Equitable Life, etc., etc.' perhaps?

In honour of the obviously honourable purpose of this new statistical 'series' - to show the true level of UK Government debt to GDP - the Bishop has resolved to create a new measure. I proudly present:

- The UK wouldn't have wasted its Marshall Aid on building an unsustainable welfare state; instead, it would have rebuilt its industries, as the French and Germans did.
- No nationalisations of steel, coal, etc.
- No NHS
- No idiot Tony Benn in the Cabinet - fewer subsidies to BAe, etc.
- No commies in the Wilson government
- The Tories wouldn't have become socialists in the 40s-70s
- The miners' strike in the 70s would have been more like the one in the 80s
- The Trade Unions would have been told to fuck off earlier
- Taxes would have always been significantly lower
- Ken Clarke's spending plans would not have been followed by a splurge of public spending that mortgaged the future
- Etc.

UK GDP per capita, in short, would be closer to that of the top countries in the world.


Next, debt without Labour fuck-ups.

- No 'Chav' class of benefit-claiming, workshy scum: welfare would be confined to the genuinely needy - and would be generous to the disabled, etc.
- No costs of nationalising industries. But equally, no revenues from privatisation. Generously, let's say no cost for the utilities. But huge costs from support for coal, steel, shipyards, Leyland, etc.
- No need to go the IMF in the 1970s
- No need to spend North Sea oil revenues on restructuring the UK economy in the 1980s - so would have had huge surpluses, perhaps put into UK Sovereign Wealth Fund
- The Tories had concluded by 1997 that PFI didn't work - no mortgaging of the future from waste of money PFI schemes that cost, rather than save money
- No tax on pensions in 1997: not so much would rest on public pensions
- Public sector surplus from Ken Clarke policies would have been used to pay off all UK debt, and spending would have been matched to revenues
- No chickening out on the renegotiation of the Civil Service Pension Scheme in the last 10 years, hence public sector pensions would be more sustainable

So UK would have had no net debt going into the current recession. Hence zero debt / GDP. And with our US+ levels of wealth, half of the population would hardly be thinking of emigrating...


Clearly, this is re-writing history, and so is fictional... But hardly any more so than Gordon's latest debt 'series'. But there is a clear lesson:

Everyone who has ever voted Labour should be disqualified from voting, at least until they've paid off their 'fair' share (national debt / labour voters)...

Do you think Polly's villa in Tuscany will cover it?
Posted by Bishop Brennan at 12:57 No comments: Links to this post

Labels: Commie Twats, Gordon the Moron, sleaze, total and utter bastards, well I can dream can't I, What the fuck?

The French, that is. Well, French politicians, at least. Even more than our own, with the exception of Gordon the Moron, who looks like the last time he saw soap and water was when he lived in the Manse.

Why am I fucked off with the French? Well, apart from the obvious (I think I've ranted about the CAP before)? They do produce good wine, after all (I enjoyed a particularly delicious bottle of 1997 Cornas last night, so much so that I finished the whole bottle...). And their food's good too. Although the Bishop prefers Spain for both.

Well, the French Church currently presides over our European Eucumenical Affairs Council. And the bastards sent a draft communication, to be sent to the Chinese Church, for agreement within the hour in fucking French! Trying to pull a fast one, they included provisions for communion wine to be sourced only from France, and for communion wafers to have 'special geographic status' that means they could only be made in Archbishop Barnier's cow shed!

Unfortunately for them, the Bishop speaks French. So I told them to fuck off.

Time for a good bottle of Ridge Cabernet - 1997. Mmmmm. I might just have to finish the bottle. Only to piss off the health fascists who have been putting stupid ads up all over the Metrocity Metro, you understand?


BB
Posted by Bishop Brennan at 12:34 No comments: Links to this post

Guido had this totally-unfunny story last week regarding a possible source of Lord Mandelson's kidney stone. [Warning: the PC amongst you won't like the header. So you can go fuck yourselves.]

However, the Bishop has discovered a more likely source.

Still, at least someone (Reinaldo?) will have got some pleasure from the event. Other than the entire population of the UK, that is.


BB
Posted by Bishop Brennan at 12:27 No comments: Links to this post

Posted by Bishop Brennan at 12:27 No comments: Links to this post 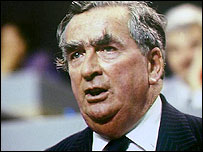 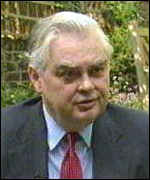 What do these three men have in common?

But why is it that men with bushy eyebrows have ended up taking the flack for their predecessors' cock-ups? (OK, I suspect Healey deserved it, but... And anyone who is stupid enough to think Gordon Brown is their 'friend' and won't drop them in it, well...)

At least 'Storming' Norman didn't have to go to the IMF with a begging bowl... let's hope that Sam the Eagle doesn't end up in his own version of Life on Mars, circa 1976 (although it would be fucking funny... until it hit my standard of living)

Basically, this is a warning - if you have bushy eyebrows, trim them regularly! Mrs Brennan is getting the tweezers as I speak - I don't know whether to laugh or cry :(

No wonderTeresa Gorman replaced her eyebrows with tattoos...


BB
Posted by Bishop Brennan at 14:19 No comments: Links to this post

Apologies for the long time since the last post - I've been away on a, ahem, fact finding trip to the US, and have taken a week to recover from the jetlag. The good news is that it gave me some interesting food for thought / blogging....


BB
Posted by Bishop Brennan at 08:20 No comments: Links to this post

Bishop Brennan
Craggy Island, EuSSR
A Holy Man sent to help Craggy Island, particularly by sorting out that Gobshite Crilly (that's me, on the right, sorting him out, above).